Bam! Pow! Zap! That’s how the appointment felt. I know things could be so much worse, but it felt like a sucker punch right in the gut. I have no idea what a sucker punch to the gut feels like, but at that moment, I think I did. She could not have given the news in a more kind, respectful way, but it wasn’t what I was expecting. It was evident by her demeanor from the time she walked into the room she was was uncomfortable. It wasn’t long before it was clear why she was uncomfortable. She was the one picked to share the not so great news. She asked what my goals were for Sam. In every other word, I told her I wanted to get rid of the trach. It feels a bit foggy after that. All I know is she said they were all scratching at the edge of their boxes. They (Sam’s care team) have some things they could try, but they are very risky, and wouldn’t want something to happen to Sam and then regret they hadn’t referred him to Cincinnati. Collectively, all of Sam’s doctors have decided because of his continued complexity, they are not what’s best for him. They referred him to Cincinnati Children’s Hospital’s Areodigestive & Esophageal Center.

Although it felt like a shock, it shouldn’t have been. It’s a subject that’s been danced around since Sam was two and a half months old. And since March, it’s been really danced around. I think we were just in denial. We have so much faith and trust in his doctors here.

Here is a post I started writing before summer started, but didn’t finish…

Sophisticated can be defined as complex or intricate, as a system, process, piece of machinery,  or the like. Quite fitting for Sam. It’s not the first time, doctors have no clue or haven’t heard of some of Sam’s diagnoses. It is the first time though his doctors are not quite sure what to do.

After discussing with gastroenterologists and surgeons nationally, Sam’s docs have come up with a plan. And thankfully, after some discussions, it doesn’t involve going to a hospital out of state. Let’s just say Sam is a rare case. In all reality he has been since the the beginning. He continues to be quite medically complex, but despite his complexities, for the most part, he’s thriving!

Sam had his 23nd and 24th, if I’ve counted correctly, esophageal dilations in the last couple of months. Once again, he made general anesthesia look easy and recovered very quickly both times. It was a little easier to hand him over to surgery the past two times as he got something to help him feel relaxed and sleepy before they poked and prodded at him. Like I said before, as Sam gets older things get harder for him and, in turn, us. He’s starting to remember what happens to him when we go certain parts of the hospital.

Here’s a short story on him getting smarter…

Because Sam doesn’t eat or drink anything by mouth, there’s a bit of a rush to get a new feeding tube in if it comes out unexpectedly. He’s a very busy boy and despite our efforts to to rig ways to keep the tube in, inevitably it gets pulled out once in a while. It doesn’t help he eats fourteen of the twenty-four hours in a day. Backstory…he goes to radiology to get his feeding tube changed every two to three months. He’s had this type of feeding tube for almost two years and it’s always gone fairly smooth when we get it changed. As soon as we walked into the radiology room, Sam instantly became agitated. One thing we’ve all learned about Sam is unless something is really wrong, he doesn’t get upset. It wasn’t long before we figured out what the problem was. He knew exactly what was about to happen to him. I can’t imagine a six inch tube pushed into your stomach and then through your small intestines feels real hot. Poor buddy. Every procedure gets a little tougher as he gets older, but overall, he’s a trooper.

We will be taking a little trip to Mayo where Sam will have a special test (esophageal manometry) done to determine how well his esophagus works. Pediatric esophageal manometries are not done very many places and it’s a relatively new test done at Mayo for a pediatric patient who doesn’t eat or drink by mouth. We are just happy to be able to stay in Minnesota. Depending on the motility of Sam’s esophagus, will determine which surgery will be best for Sam. Either way, something needs to be done as they cannot continue to stretch his esophagus every month. This creates retching and retching means the trach can’t come out. In short, in order for Sam to get rid of his trach, which we all thought would be long gone by now, all of his tummy stuff needs to be fixed first. As Sam’s doctors would say, Sam is complex. He’s never been an easy fix, but they continue to search for answers and we couldn’t ask for a better, more dedicated team.

Sam will have another dilation in July. Continue to keep him and the rest of us in your prayers.

Again, although Sam is a full-time job and then some, he’s doing very well. He’s making some sounds and knows about 15-20 signs. His newest sign is “outside”. Before, he would grab my hand, pull me to the gate, and want me to hold him. I’d pick him up and then he would wiggle his little body to motion me more towards the gate while also getting mad. Or he would just keep pushing me into the gate. We’ve been working on the sign for outside. The other day, he did his thing where he pulls me to the gate, but this time, signed “outside”! We were pretty excited! I wasn’t going to take him outside, but who could resist that?!

To make a VERY long story short, since March, Sam has had four more esophageal dilations, which I think makes twenty-five. As always, he recovered beautifully from all of them. He also took a trip to the Mayo Clinic. He did not end up having the esophageal manometry done there. Although Mayo is an amazing place, it’s not the best place for Sam. He’s a rare case and his doctors want to him to see the best of the best, which for him, is Cincinnati Children’s.

Since the news about a month ago now, I’ve been able to change my thinking from, we HAVE to go to Cincinnati to we GET to go to Cincinnati. Let me tell you, A LOT of negative thoughts were running through my head when I was hashing it out to the big man upstairs. How in the world are we going to get him there?! We’ve never been overnight with him unless it’s the hospital. What if we have to be there for a long time? I don’t want to split my family up again. How is this going to work financially?! Had I of known, I would have saved the money we used to build a deck and used it for Cincinnati instead. What if we go all the way there and they can’t fix him?

These are all legitimate concerns I still have and there are many more, but since I’ve changed my thinking from we HAVE to go, to we GET to go, and let go and let God, I’m much more at peace with it. My plans are not His and although that can be hard sometimes, my life is a lot less stressful when I can truly accept that. I will always bank on that, although Sam is complicated, he is here.

We have started the process with Cincinnati, but don’t have any details. Again, we will wait, which according to Dr. Seuss is the most useless place. Yes, I agree, waiting is useless so that’s why I choose not to dwell on it. I choose not to wait, but to enjoy the moments I am in right now, like…

…Sam’s doctors okaying him to start school next week.

…being home and able to send my kids off to their first day of school. 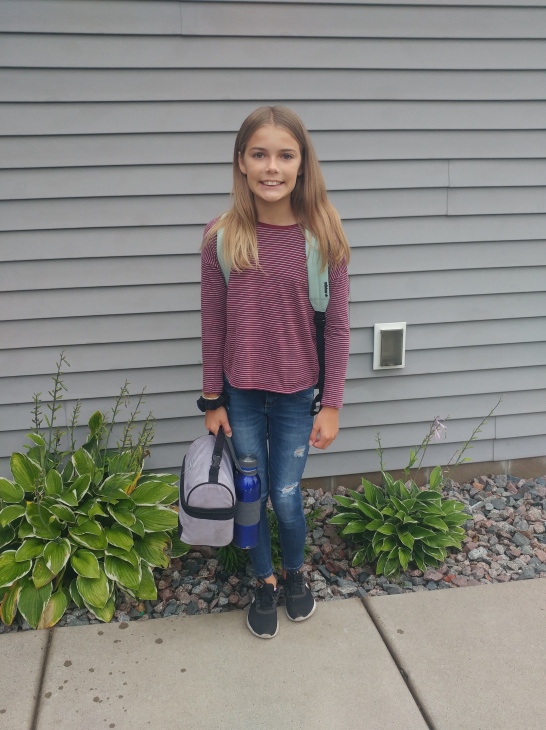 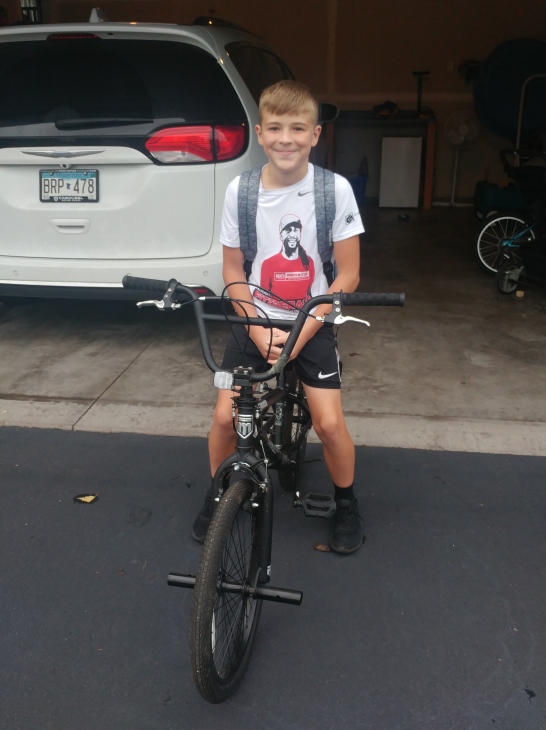 …getting rained on the entire kayaking trip we took for the first time. 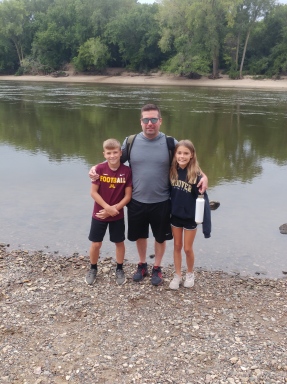 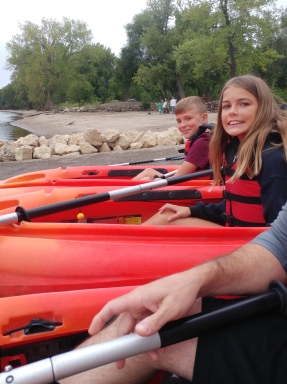 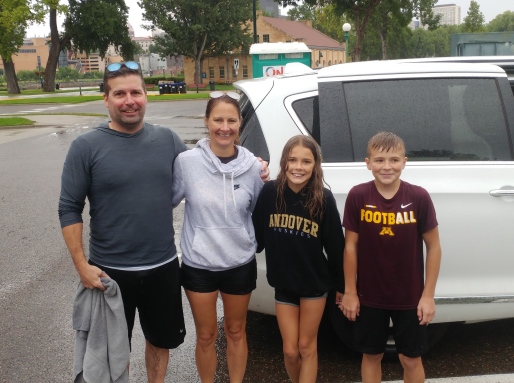 We’re freezing, but we did it!

…going to the great MN get together. 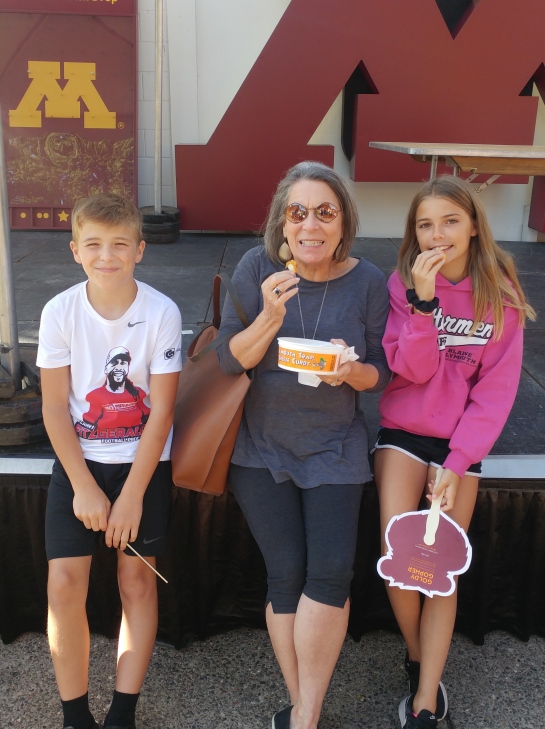 Cheese curds are the best. 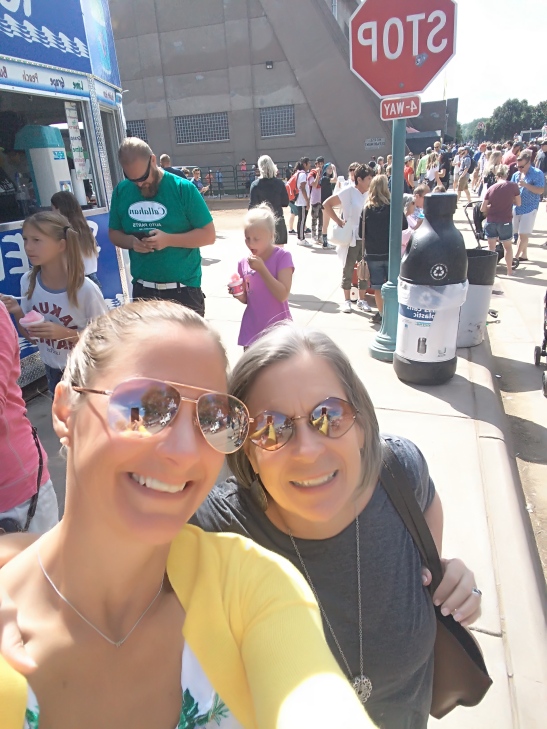 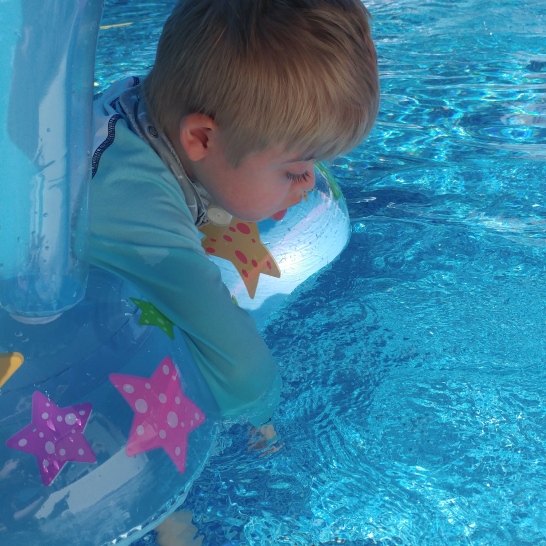 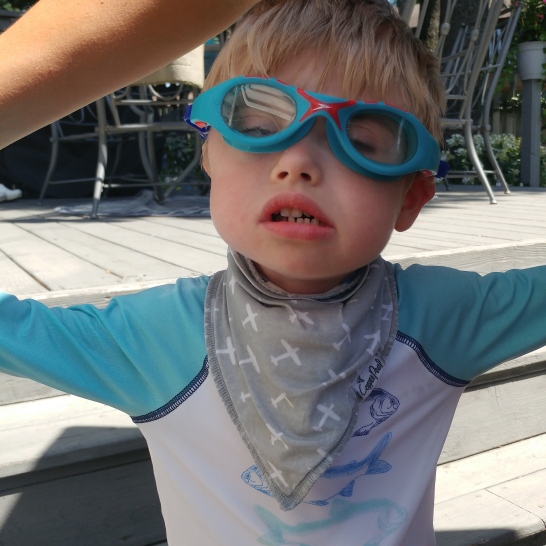 …having a lemonade stand to raise money for Ronald McDonald House Charities. 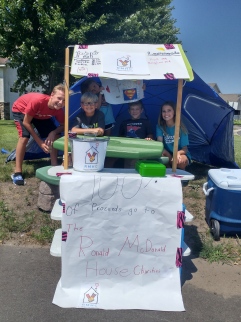 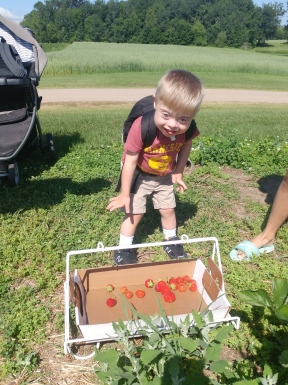 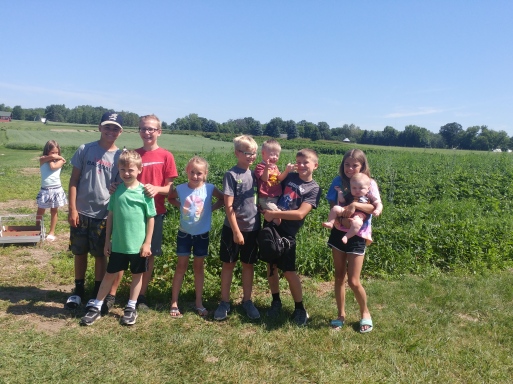 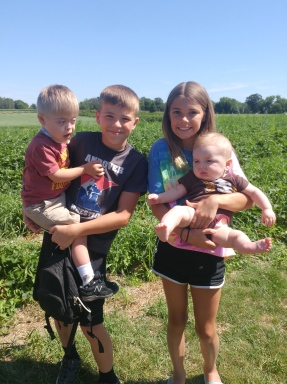 …being a part of my sister-in-law’s beautiful wedding. 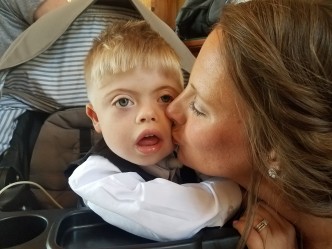 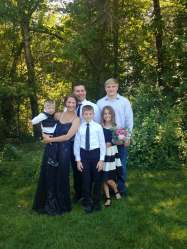 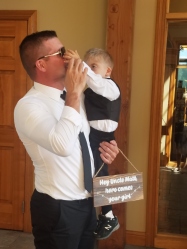 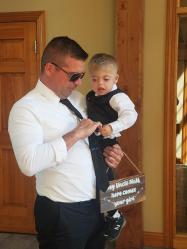 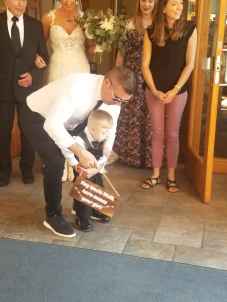 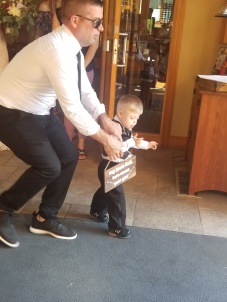 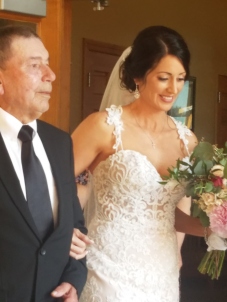 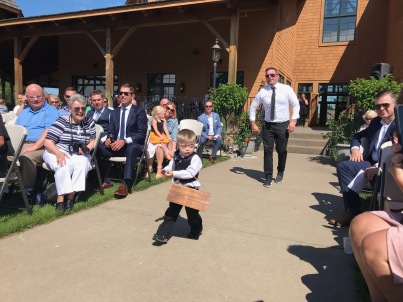 I’ve got this Dad.

That is what life is all about.