I cannot believe I did that for over seven months. That was an awful long four days. It’s definitely harder now that Sam is older and much more aware. At the beginning of Sam’s life, the hospital was his home. Thank God, the hospital is no longer his home, but he is fully aware of that.

Initially, they kept Sam for dehydration. Sam’s trach culture came back with an active tracheitis. Not surprising. That’s the cursing of having a trach (breathing tube). I often describe having a trach as a blessing and a cursing all in one. Essentially, Sam caught a cold and that cold turned into tracheitis. First there’s a flood of secretions, then it’s hard for him to control all of them, and that leads to almost constant retching. Usually we can run his feeding pump at a pace with Pedialyte that’s just enough to keep him hydrated. Not this time. So, I guess this is a classic example of it’s never “just a cold” for Sam.

Thankfully, Sam is on the mend and nearly back to himself.

In the past three months, Sam has been given three new diagnoses, two of which will need surgery down the road.

I’m not gonna lie, and tell you I wasn’t a bit overwhelmed after spending four days in the hospital and also learning of another diagnosis that will need surgery.

The second of the three diagnoses we found out two weeks prior to Sam’s hospitalization. We were referred to a new specialty. The doctor came into the room and jokingly said, “Well, I looked over his charts and see his one hundred fifty surgeries.” I responded with a sincere smile on my face, “Well, he hasn’t had that many, but yes, it’s been a lot.” He smiled and said, “Let’s take a look at him.” It only took him a few moments to feel and diagnose Sam. The doc nonchalantly said, “Make sure they schedule me in on the next surgery and I’ll snip, snip. My part should only take about twenty minutes.” He had some very kind words and walked out of the room. Sam’s nurse and I instantly laughed how the doc assumed Sam would be having another surgery sometime in the near future. Laughing is better than crying.

Fast forward a couple of weeks. Sam gets sick. We end up getting admitted to the hospital. While we were there, Sam wouldn’t let me put him down. Except for at night, it was him on my lap sleeping, crying, or retching. Through all this I noticed a clicking in his left hip. I brought it up to the Intensivist (cares for seriously ill infants and children or those who need a high-level of monitoring in a specialized inpatient unit). He said he could look, but he’s not the expert in that area. He tried to call an orthopedic doctor/surgeon to see if he/she would take a look, but was told they do not come up on the PICU (Pediatric Intensive Care Unit) floors and it would need to be an outpatient visit. After the third day, the clicking turned into a popping sound and seemed to be much more profound as time passed. I kept telling myself it was in my head until it got to the point you could actually see his hip almost jolt in and out of place. It sounded and felt yucky. After showing the Intensivist again the next day, he thought he would try orthopedics another time in hopes a different doc might be on. He said he would try work his magic. To my surprise, his magic worked, an orthopedic surgeon came and checked Sam out.

It wasn’t long before she diagnosed Sam. The resident doctor with her quietly said something almost under his breath to the orthopedic doc after feeling Sam’s hips. She quickly nodded her head at him and returned talking to me. That’s when I knew it wouldn’t be great news. Basically, we know Sam will eventually have another surgery that will leave him in a body cast for up to four months. Wah. Wah.

He was sent home with a brace to wear at rest until we could be seen outpatient at the specialty clinic. I’m not so sure the doc was fully aware of how active Sam is. The brace wasn’t so bad when Sam wasn’t feeling great, not so much now. We’ll do our best until then. 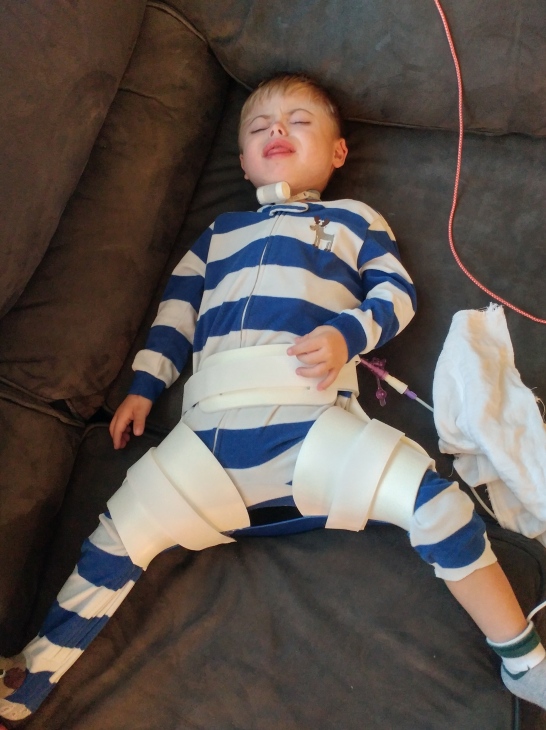 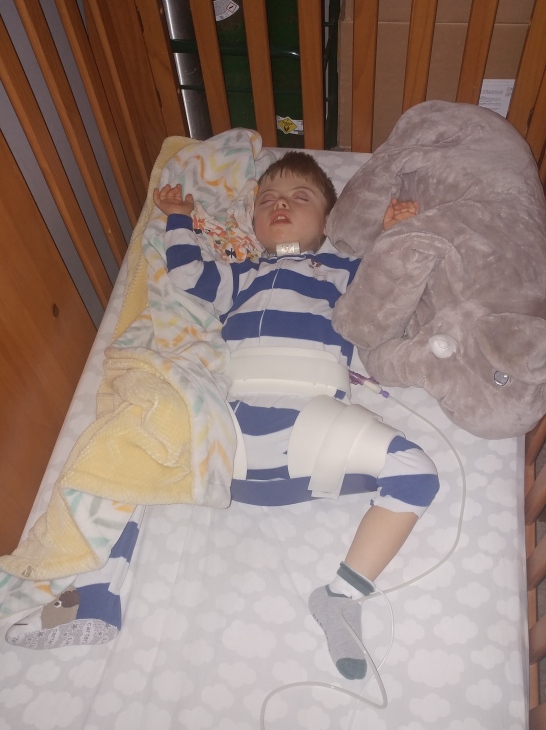 The first night wasn’t so bad.

Sam was elated to be back at school last week and sounds like everyone was happy to have him back. I believe Sam will be stay healthy and stay in school where he is thriving. Believe with me.

Sam is happy to be back at school. 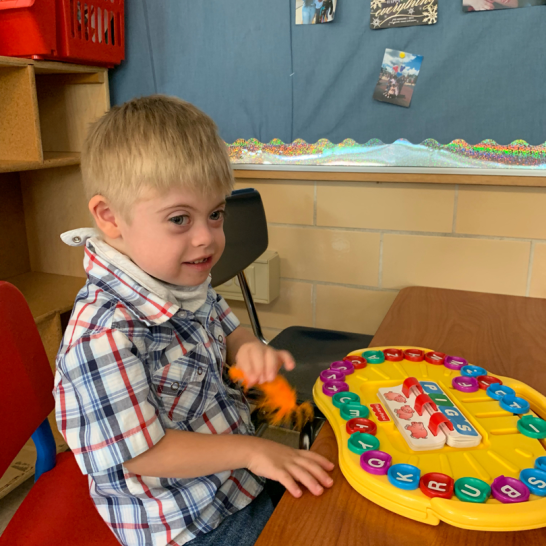 Happy to be back at school.

We continue to be Sam Strong have Faith Over Fear Always.